MUTEK_IMG, the 4th edition of the forum on current practices in digital creation, takes place April 11-13 at the Phi Centre, as part of the official program of the Digital Spring and in collaboration with the Goethe-Institut. MUTEK_IMG aims to strengthen the leadership of Montréal as a nerve centre of digital creativity, contributing to its development and its influence by the promotion of its culture, its creators and the activation of local and international collaborations.

At the core of the event lied a conference program with panels, workshops and case studies presented in collaboration with several partners such as the digital art magazine HOLO, exploring a panoply of themes, including:

A German-Canadian Exchange in Virtual Reality

With the exchange project, VR:RV, journalism and the newest immersive technologies come together to reimagine our interaction with digital society. This initiative offers professional virtual reality (VR) creators, artists, thinkers and journalists from Canada and Germany the opportunity to exchange knowledge, collaborate on new works, and share their critical explorations with the public. A series of three meetings are organized over the course of 7 months for selected German and Canadian participants, comprising of internal workshop sessions and public panels. The first meeting will be in Montreal at MUTEK_IMG, followed by a meeting in Berlin in May at re:publica, with a final stop in Montreal in November at Doc Circuit Montréal during the Rencontres internationales du documentaire de Montréal. A project by the Goethe-Institut, realized with the support of the Federal Foreign Office of Germany, the aim of VR:RV is to foster self-reflective works in virtual reality which explore the creative frontiers of the medium.

Highlighting creativity, entrepreneurship, innovation and vision, the Canadian VR scene has risen to international attention over the last five years - producing some of the most celebrated VR pieces and talents. Equally as prolific, but less well-known abroad, the German VR scene has also been expanding and exploring VR as a new medium, with application in a variety of fields including science, medicine and journalism.

This exchange aims to invigorate the scenes in both countries by creating the ideal setting for networking, collaboration and co-production, while also rethinking the language and modes by which we engage both with VR and with the wider digital world. VR:RV intends to provoke conversations, and ultimately VR works, that challenge, expose, critique and problematize the digital society through issues such as artificial intelligence, algorithms, digital privacy, digital democracy and the future of the internet.

For more information visit the website of the Goethe-Institut.

VR:RV is a project by the Goethe-Institut realized with the support of the Federal Foreign Office of Germany. The project has been developed in close collaboration with MUTEK and re:publica in Berlin. The workshop component during MUTEK_IMG is also supported by the Canada Council for the Arts. Further project partners include: National Film Board of Canada, the Canadian Film Centre, ARTE Germany, DCM (RIDM's industry event), and Retune.

We acknowledge the support of the Canada Council for the Arts, which last year invested $153 million to bring the arts to Canadians throughout the country. 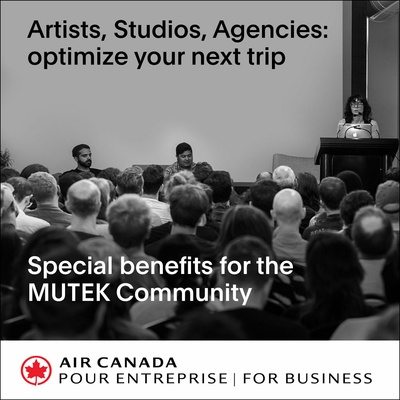 Air Canada for Business: a free program helping creative studios and independent artists save on travel and earn rewards. Enroll by September 30 to take advantage of a special promotion for the MUTEK community, including 15% off the base fare on your first flight.